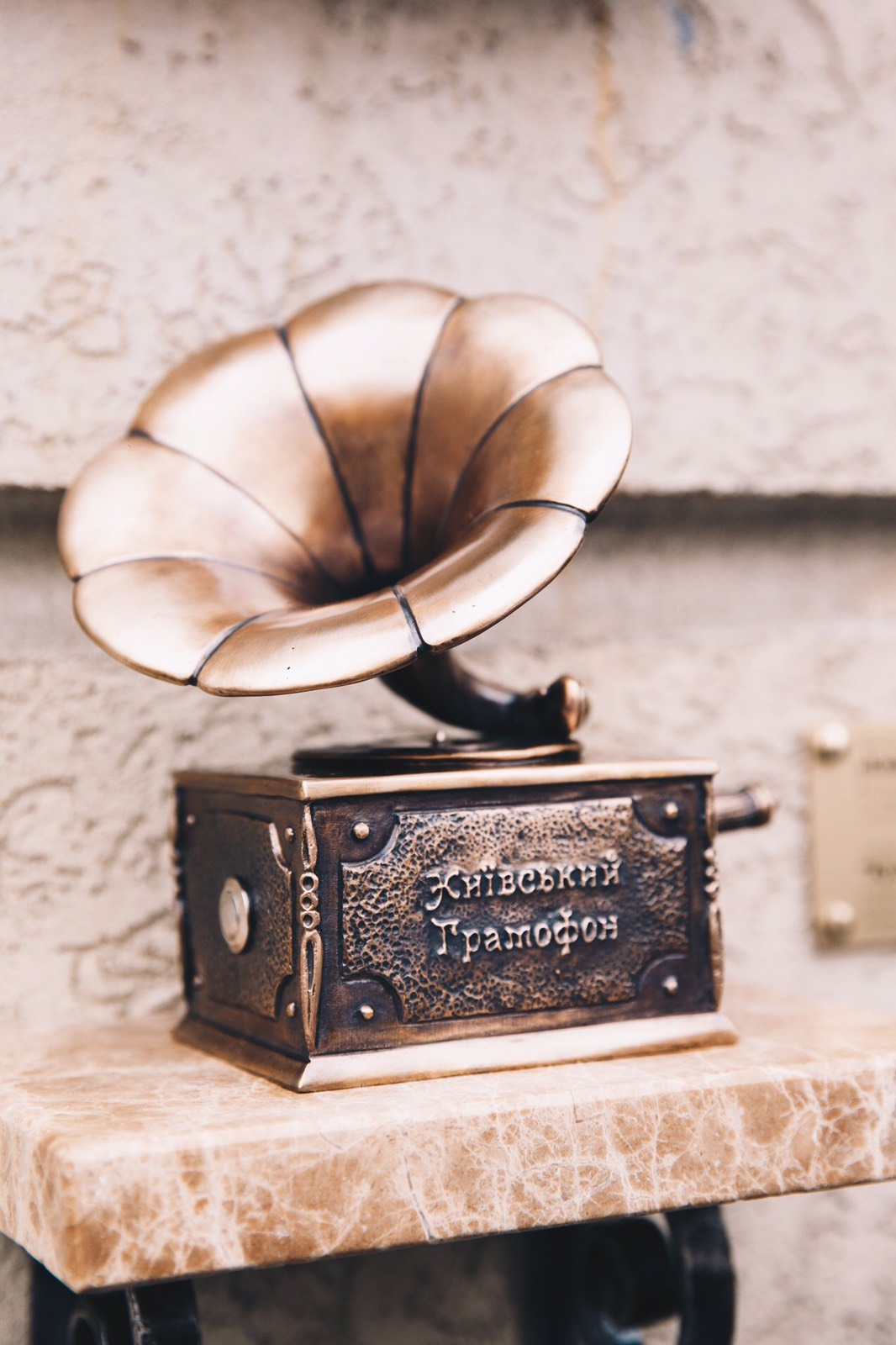 Look for the tenth anniversary mini-sculpture of the Shukay project at the entrance to the restaurant Pervak.

Gramophone – music. Press the button and you will hear the Kyiv anthem – “How Do not Love You, My Kyiv”.
Kyiv Gramophone. History
At the end of the 19th – at the beginning of the 20th century in Kyiv there was a big
store “Depot of musical instruments” owned by J.J.Yindrzhyshek. The store had its
own musical instruments repairing shop as well as a workshop for making those
musical instruments.

In 1902 they opened a note department and since 1903 the shop started selling
gramophones and records.

In 1909 a head of a small German trading firm “International Extra-Record” Ernest
Hesse arrived in Kyiv.

Hesse along with the Russian Czech Yindrzhyshek, owner of the musical store
“Depot”, opened a recording studio on Khreshchatyk Vulytsia.

Wax molds made by Kyiv department of “International Extra-Record” were
immediately sent to Berlin, where the production of records was located.

Transportation expenses of the enterprise were big, at the same time the demand for
records significantly was overtaking the supply. As a result the fulfillment of the
orders was constantly delayed so eventually partners decided to build a vinyl factory
in Kyiv.

They chose a place in Shuliavka area, which at that time was the residence of a big
Czech immigrants’ colony many of whom were working at Hreter and Kryvaneka
factory (at present “Bilshovyk” factory).

On the 2 nd of July Yindrzhyshek asked for permission to build a factory. On 24 th of
September he received it. The foundation of the factory was laid festively at 5 Druha
Dachna liniia (at present 31-33 Smolenska Vulytsia).

The architects of the factory – Filip Kraus and Bedrykh Korab.
They put a glass vessel into the foundation of the factory containing a sealed letter
written by Yindrzhyshek to his descendants.

That letter was found in 1965 or 1966 during the reconstruction of the building.
The main building was almost ready before June 1991. A new factory was registered
under the name “Ekstrafon”.

In the early hours of 8 th of June (according to a different source the 12 th ) the building
caught on fire. The disaster inflicted losses on the sum of 150 000 roubles. A
considerable part of records was destroyed.

It is thought that after that case Hesse lost interest in the enterprise and sold the intact
property to Yindrzhyshek. Yet according to some archive documents the partners
kept holding joint-stock capital in equal parts.

The factory was not insured because administratively it was located outside Kyiv.
Moreover, insurance companies refused to insure a fire-prone enterprise.
Yindrzhyshek invested additional 50 000 roubles into the business and resumed
equipping the factory.

Another hindrance for opening the enterprise was an appeal to the authority on behalf
of the owners of summer houses. They were afraid of new fires and demanded to
close the enterprise.

In spite of this, in October, Yindrzhyshek received the permission to continue the
construction but on the condition that he would equip the factory with steam boilers
and later on with oil engines in order to decrease air pollution.

At the end of 1911 in “Depot of musical instruments” there was the first sale of vinyl
records made at “Ekstrafon” factory using mother records of “International Extra-
Record” that remained intact after the fire. The first vinyl records 25cm in diameter
were sold for 1 rouble and single-sided vinyl records 28cm in diameter cost you 50
kopecks.

At the same time they started issuing an advertising magazine “Plativka” and after a
while even opened their own Recording Studio on the territory of factory.